skip to main | skip to sidebar

"Shoot 'em Up": Guns From Our Historic Past

Once in a while browsing old newspapers can yield a real nugget. In the February 8, 1938 Great Falls Tribune, I found an absolute gem, titled, “Great Falls Man Has Unusual Collection of Weapons Used by Early Day Montanans. Earl Talbott Has Spent Much Time in Gathering Pioneers’ Firearms.” Accompanied by a photograph showing some of the historic firearms, the article describes many of the firearms that good men and bad men carried as they roamed frontier Montana.

The news article reads as follows; my comments are in brackets:

“Grimly reminiscent of the days when Montana was in its infancy and firearms were a necessity, a collection of rifles, revolvers and pistols that played a prominent part in pioneers days has been gathered by Earl Talbott, 1521 7th Avenue North, who is a member of the city [Great Falls] library board.

His collection is not confined to the firearms used in the early days of the state but includes various types used during the World war [World War I], in the Philippine insurrection and during other troublesome times.

Talbott has made a successful attempt to authenticate the various exhibits and his catalogued index of firearms includes the following:

• A Halls patent U.S.S. North, manufactured in 1848 and of about .53 caliber. The gun was brought to Fort Benton in 1850 by Clemeaux, who was said to be the first white man married there; [Model 1848 Hall-North U.S. Breech-loading Percussion Carbine]

• A Burnsides Rifle Co. muzzleloader, .45 caliber and weighing more than 20 lbs., which was brought to Montana in 1868 by one of the early settlers on the Marias river; [Ambrose Burnside formed the Burnside Firearms Company in 1854]

• A Gallagher’s patent breech loader, .50 caliber, which was brought to Montana in 1868 by George Steel [Steell], who was a businessman at Sun River in the late ‘60s [1860s] and early ‘70s; [Gallagher Civil War Carbine] [George Steell was a freighter and merchant in early Fort Benton and the Sun River valley.]

• A Winchester model which was brought to Montana in a covered wagon in 1886 by H. M. Allison;

• A Sharps old reliable .40 caliber breech loader, which was originally owned by Jim Bostwick, who traded it to Dan O’Reilly after the latter was discharged from the 7th U.S. infantry in 1871. Bostwick was killed by Indians in 1877 and the gun is known to have killed at least five Indians and untold buffaloes; [Henry S. Bostwick was a civilian scout attached to Col. John Gibbon’s 7th Infantry at Fort Shaw. Bostwick was killed by the Nez Perce at Battle of the Big Hole with 1st Lieutenant James H. Bradley]

• A U.S. Ball’s patent, .50 caliber carbine, which was brought to Montana by Col. James Stanford when he came from Canada in 1875; [Colonel James T. Stanford, an early Fort Benton resident, served in the North West Mounted Police and the Montana militia.]

• A J. H. Rector cap and ball of about .43 or .44 caliber, which was owned by the grandfather of Sam French and which carries emblems of the Knights Templar and other York rite Masonic bodies and which was brought to Montana in 1886 but was used in New York and Wisconsin long before that time;

• A U.S. Providence Tool Co. .58 caliber rifle, which was used by John French in the Civil War;

• A Filipino wooden gun brought from the Philippine islands--Filipinos were armed with one actual gun to 5 men, and the other 4 men carrying wooden guns;

• A. Smith, London double barrel muzzleloader, which was manufactured in 1825, and which was brought to Fort Benton in 1854 by Ami Lapine;

• An Eilson double barreled muzzleloader, which was owned by Jerry Potts in Fort Benton in 1866. Potts left Fort Benton about 1874 when he went with Col. Macleod as a scout to establish the North West Mounted Police station at the site of Fort Macleod, Alberta; [Son of a fur trading father and Blackfoot mother, Jerry Potts served as hunter, interpreter, and scout at Fort Benton. With the arrival of the North West Mounted Police, Potts became their chief scout, advisor, and interpreter.]

• A U.S. William Mason-Taunton .58 caliber cap and ball, which was owned by John J. Healy, an early day sheriff; [John J. Healy arrived in the future Montana Territory in 1862. Based in Fort Benton, colorful Johnny Healy served as Whiskey Trader, sheriff, scout, newsman, and adventurer until the 1880s when he moved on to Canada and then Alaska.]

• A .38 caliber cap and ball, which was used by ‘Dad’ Emerson, who told Talbott of seeing the vigilantes in action and knew George Ives, Henry Plummer, ‘Clubfoot’ George and others, and who freighted between Fort Benton and Virginia City. He helped move soldiers from Utah to Fort Benton, traveling but 18 miles in 20 days;

• A flintlock rifle of .57 caliber, which was acquired from Indians at Fort Benton in 1845 by Jim Bostwick;

• An Enfield rifle, which was owned by Capt. Nelse Villeaux (Narcissus), who at one time was a Missouri river boat captain; [Captain Nils Veilleaux was an early rancher on the Teton River.]

• A .45 caliber Colts revolver, which was taken from ‘Kid’ Curry, when he was jailed at Fort Benton; a double barreled cap and ball pistol; [Harvey Logan alias “Kid Curry” killed Pike Landusky in December 29, 1894. He was never jailed or tried for the killing, but gave the revolver to his sidekick Jim Thornhill. Thornhill was tried in Fort Benton, but acquitted, and the revolver was returned to him.]

• An American double action revolver, which was taken from James Wilber, who allegedly murdered five people in the Judith country and was arrested near Cascade (Wilbur is supposed to have hanged himself in the old county jail here); [James Wilber murdered a family of five in the Judith Basin in June 1889, and hanged himself in the Cascade County jail in Great Falls before he could be brought to justice.]

• A Hopkins-Allen double action revolver, which was taken from a bad man here in 1885.” 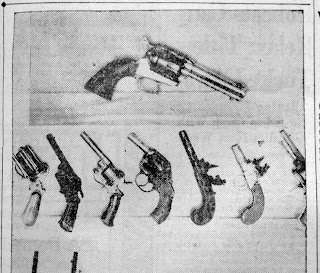 “Photo: Guns with a history are those in the collection of Earl Talbott, a small number of which are shown here. Revolver at top is that which fired the fatal bullet in the ‘Kid’ Curry-Pike Landusky slaying. Lined up in the row beneath are odd pistols used in the early days, from left to right, a 6-barreled pinfire revolver; a pinfire revolver handmade, unearthed by a plow in the Kibbey canyon area in 1880; another pinfire revolver, taken from a would-be bad man in Great Falls in 1885; revolver taken from James Wilber, allegedly the weapon with which he slew five persons in the Judith country; a muzzle loading flintlock pistol, brought from England in 1795 by ancestors of Frank E. Wilcocks, local resident; flintlock pistol, in working order, found on the Cow island battlefield near Glasgow by J. W. Tattan, who later became Chouteau county district judge, and pinfire revolver taken from Great Falls bad man in 1885.” 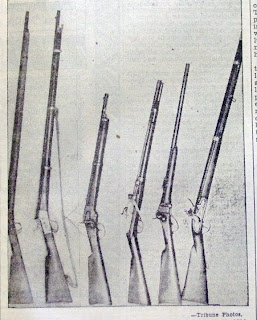 “Photo: At left, is a wooden gun used by Philippine insurrectionists. Next to it is the real gun it imitated. Other rifles, left to right, are a breech loading cavalry carbine, one of the first repeaters made; breech loading ‘muzzle loader,’ patented in 1848; Sharps ‘Old Reliable’ 40-caliber rifle of a type which killed most buffalo in early days, and flintlock musket which Jim Bostwick got from an Indian at Fort Benton in 1845. Bostwick was killed in the Big Hole in 1877. His widow kept the gun until 1896, then gave it to Sam French, who gave it to Talbott. Practically all of the guns shown are in good working order.”

The above are but a few of the firearms acquired by Talbott, all of which played an important part in the history of Montana. So, what happened to the Talbott gun collection? Earl Talbott lived in Great Falls until 1956, when he moved to Arizona. According to Nate Murphy, formerly with the Phillips County Museum in Malta, Talbott sold most of his collection to Gene Hansard of Rudyard, a fellow gun collector. In 1958 Hansard’s basement in his Rudyard home was filled with about 300 pistols, revolvers and rifles including the Kid Curry revolver, George Steell’s revolver, and others. Nate Murphy states that some of these historic weapons were lost in a fire at the Hansard home. In 1999 Hansard, then living in Great Falls, presented the Kid Curry revolver to Nate Murphy for the Phillips County Museum, where it is still on display. Hansard has since passed away, and at this point we simply don’t know where the rest of these historic weapons are located. Where are the weapons of Jerry Potts, Johnny Healy, and the many others of importance to our region? Perhaps a reader knows and will share with us.