skip to main | skip to sidebar

Life and Death on the Upper Missouri: The Frontier Sketches of Johnny Healy

My new book is published! Its available on Amazon.com right now and I'll have copies next week. Ole Johnny Healy blazed quite a trail across the early northwest . . . and he was a great Irish storyteller. Enjoy! 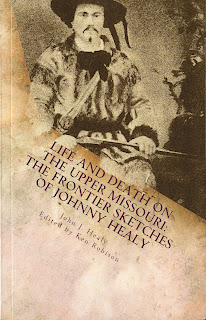 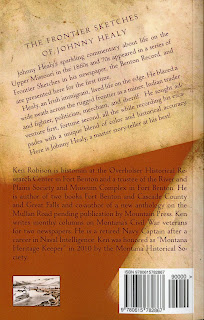 Johnny Healy's sparkling commentary about life on the Upper Missouri in the 1860s and 70s appeared as a series of Frontier Sketches in his newspaper, the Benton Record, northern Montana's first newspaper. Healy's Sketches are presented here for the first time in book form. John J. Healy, an Irish immigrant lived life on the edge. He blazed a wide swath across the Upper Missouri frontier as a miner, Indian trader and fighter, politician, merchant, and sheriff. He sought adventure first, fortune second, all the while recording his escapades with a unique blend of color and historical accuracy. Here is Johnny Healy, a master story-teller at his best!

Born in Cork, Ireland in 1837, John Jerome Healy immigrated to the U.S. and joined the Army's Second Dragoons during the Mormon Campaign in 1858. Discharged from the Army in 1860 just before the Civil War, Healy joined an emigrant train en route Oregon. Fighting off native Indian raids, Healy gained "gold fever" and stampeded to the new Idaho gold fields. His party struck gold at Florence, yet Healy continued to seek adventure more than riches.

For the next quarter century Johnny Healy centered his adventures on the Upper Missouri River. There he established a robe trading post at Sun River Crossing and began to acquire the money he needed to move across the Canadian border to challenge the mighty Hudson Bay Company. It was at Healy's Trading Post in 1867 that Acting Governor Thomas Francis Meagher spent his last days before riding on to his death at Fort Benton, falling, jumping or being pushed off a steamboat never to be seen again. By 1869, Healy had the money he needed to built a major trading post, Fort Whoop-Up, near today's Lethbridge, and with other Free Traders from Fort Benton began to dominate the robe trade, often using whisky to "sweeten the pot" for the native bison robe trade just as the Hudson Bay Company had used rum for the same purpose. In reaction, the Canadians formed the North West Mounted Police and move this new force into western Canada to shut down the American traders with Johnny Healy their premier target.

By 1874 Healy withdrew from Canadian territory to relocate to Fort Benton where he operated as a government scout in the Nez Perce War and led General Alfred Terry across the Canadian border for a fateful meeting with the Sioux and Sitting Bull at Fort Walsh. Healy was named Sheriff of massive historic Choteau County which extended from the Rocky Mountain Front eastward to the Little Rockies and from the Judith Basin northward to the Canadian border. He served with distinction as Sheriff for most of the eight years. Throughout the Fort Benton years Healy joined a large contingent of Irish Fenians who kept life at the head of navigation lively at all times. Healy's Frontier Sketches record many of his lively adventures and those of his friends. He presents the most compete record of the violent years between Blackfoot and white settlers from 1865-70, culminating in the murder of legendary fur trader Malcolm Clarke and the retaliatory Marias Massacre. Healy records many of the conflicts initiated by the Sioux as they were forced westward into Montana Territory along the Missouri River.

My book presents for the first time all fifty Frontier Sketches by Johnny Healy together with a series of important stories written by him about the Nez Perce War and other adventures. Throughout these stories Johnny Healy proves to be a master story-teller. His historically accurate tales are illustrated with many photographs and images together with introductory text and endnote documentation by the editor. History is best told through story telling, and few told the history of the early Northwest better than Johnny Healy. He walked, rode, scrapped, and fought, and wrote boldly as he blazed a trail across the region.
Posted by Fort Benton Historian at 08:47 No comments: